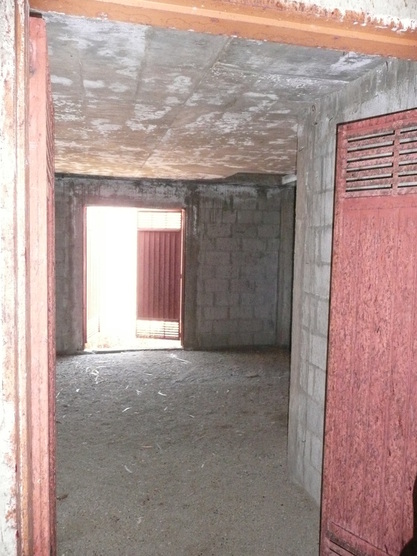 Main Building: Entrance to one of the bedroom spaces, all with bathrooms
Eco Village questions and answers sheet:

David Nordheimer August 7 at 8:18am
I have some questions.

1. How much total funding is needed to purchase the property?
2. How are you going to deal with the deed?
3. Will people who contribute to the funding own shares of the property and how will that be handled?
4. What kind of physical commitments will be needed, and will there be a possibility of earning shares in that way (sweat equity)? How will a fair value for that be determined and by whom?
5. Is this an actual non-profit venture? If so, what is (or will be) its legal non-profit status?
6. Will people who contribute have any rights over and above those who basically just show up and squat on the land?
7. How will you deal with disruptive, counter-productive, parasitic and otherwise negative influences on the project?
8. What will the decision-making processes be and who will be allowed to participate in them?
9. Is there any legal representation independent of the seller of the property?
10. Besides the purchase price, what other expenses can be reasonably expected, and how do you plan to prepare for that?
11. Can you commit to complete transparency in all legal and logistical matters with all parties who have a stake in the project?


Rainbow Hawk August 7 at 10:13am
Some answers:
(1) Although our first negotiations got the price of the property down from $264,000. (it was $364,000 a year earlier) to $200,000. I have been recently told that the owners would accept less now. How much less is of course in the art of negotiating and what we have the ability to pay.
(2) As foreigners are not allowed to outright own land within a hundred kilometers of the coast, or borders, and have to take what is essentially a long term (50 years, renewable) trust/lease administered by a bank of choice it is much more viable to found a Civil Association to hold ownership, with all community members on its' board. Foreigners with FM3 residents status, or better (easy enough to get) can by on the board. Deeding the property to the Civil Association is thee best way to go.
(3) Pretty much answered by #2
(4) Physical commitments really are not much more than sharing in the work that needs doing. Assisting each other in building homes, community garden(s) and whatever community projects evolve. Individual skills, resources and physical abilities would determine how each person contributes. It is the Council as a whole that will determine the other things. 2/3s -3/4s of the members agreement would qualify as a good general consensus on things. Anything less would be a back to the drawing board to refine for hoped for agreements, if those wanting to include things think the effort is really worth it.
(5) The community itself would be non-profit as a Civil Association (which would also qualify it for grants and such). Individuals, or collectives within the project, could establish for profit businesses (all allowed within the framework of the Civil Association when such is included in its' charter). An example could well be the sales of my own artwork via various products created with it.
(6) It is not a Rainbow free-for-all. Been there and done that one to many times and the Drainbows always screw things up. No thanks!
Those who actually contribute in real and tangible ways would have decision making voices in any Councils. Not that others opinions who may be visiting and taking part in Councils would not be listened too if they are not simply disruptive insertions by people who shouldn't be there to start with. NO SQUATTERS ALLOWED. If the community decides that any person with lack of funding should be given a chance to be a part they would thus be sponsored by the whole and abide by whatever commitments are agreed upon for such status. Generally, I would say, that any such individuals would not have a full voice in Councils until they have proven themselves as contributing parts of the community and the Council as a whole agrees to it.
(7) Such people would be down the road quickly, or if known for such conduct not allowed in to start with. Most such Drainbows are well known. Others are easy enough to spot. It is not me who would deal with it, but the community as a whole. Myself included of course.
(8) Already addressed.
(9) We do have a couple of attorneys we can tap and who have said they would help as needed. Actually Irma, who represents the seller, is well known as being honest and she is also a Notary Public (which is way more that those with the equal title in the U.S. as they are attorneys and have a great deal of power here). I personally would trust her and she loves the project, but to avoid any potential conflict of interest we can use others. Though actually t wouldn't surpise me if Irma wanted to be part of the project herself.
(10) Other expenses would obviously be completing the main building which is already there and very well built (about $35,000. - $50,000. to complete, though could be more if it was really high ended with more fancy upgrades), building of individual homes using the natural resources as much as possible (primarily stone) and whatever other community structures or projects folks agree upon. With the proposed "buy-in" of $25,000. per person it would take 20-25 members to cover all the basic cost factors. Community businesses would be expected to contribute some portion of their profits to a community fund. What portion/% would have to be a Council of the whole decision (I would suggest a minimum of 10% and up to 25% being fair, the latter being if said business uses community spaces and resources, e.g. power, etc.).
(11) The way it would be set up as a Civil Association with all contributing members being a part of it (legally). It is not me who have to commit, but everybody involved is responsible for that. Can't get any more transparent than that. I am not "the boss?" (to much like babysitting in my book). I am the Focalizer yes, but part of that job is to insure that everybody has equal rights and voices in any community decision making process. Individual business projects are responsible for their own decisions (as would be what people want to do in their own homes as long as it's peaceful and doesn't abuse others), but of course need to be kept as ecologically sound as possible and hopefully give others in the community sources of income as well, if they work with them.