Information, Proposals & How To Does 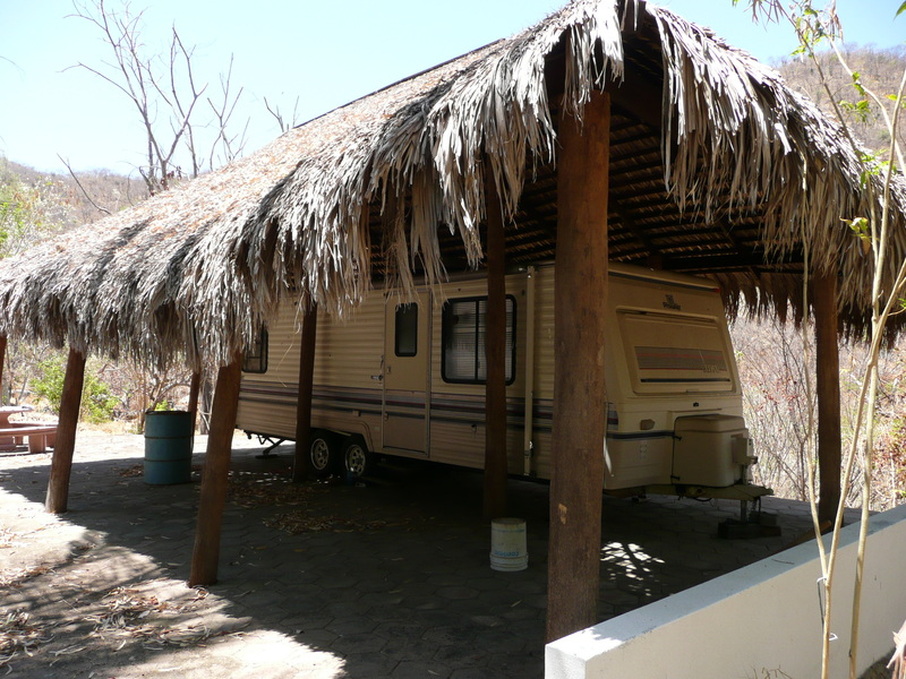 Temporary housing solution until long term homes are completed: Trailer on site which can later be used for guest housing
Housing and Construction needs:

Housing, cooking facilities... are of course of primary concern for early residents. The trailer scene above is a reasonable solution for early/temporary needs and parked under palapas offers a shaded cool areas for such. Several other unocccupied palapas also exist already and could be used for folks coming with moterhomes as things get started. Of course Tipis, Yurts, Domes and other such structures can also be used and are quite functional. Tents of course for shorter term use can also be utilized. Any such spaces could later be used by guests for events, workshops or whatever.
The existing buildings (Main Building and old Ranch House) are not as yet habitable  and need fairly extensive work to complete, or restore. It would not take much to make the existing 6 bedrooms of the main building at least basically habitable as the rest of the building is finished. Half of the old ranch house needs total replacing due to water damages to the wood, while the concrete sections are basically usable with minor work and replacement of the roof throughout the whole structure (which caused the wooden section to be badly damaged) needs to be done.
It would also be proposed to add 4 living units to the 4 corners (studio type, or up to two bedroom units) of the roof of the main building which can amply handle the load, with a rooftop gardens and a shaded palapa area for general uses. That would facilitate easier constructing of needed housing  and have no impact on the land itself, indeed enhancing it with the gardens thrown in, offsetting the impact of the building itself on vegetation that was removed for its' construction. Such would increase the living capacity of that building to 10-14 bedrooms, or living quarters for 10 -24/28 residents, depending on single or double/couples occupation and whether studio type, or 2 bedroom units, are added.
A great advantage to the site is that the weather does not reach extremes of heat or cold and indeed is considered one of the most ideal climates in the State. It gets the cooling Pacific affect, as well as the altitude factor being thrown in.

One of our first focuses will be fund raising events for the community needs. The first tentatively planned for Mid-November of 2010 which is the founding Councils' first meeting time. We would plan for events to happen on all the Solstices and Equinoxes every year as major events and perhaps others as well.
Besides featuring in community talent we will reach out to the community-at-large to volunteer music, arts & crafts, theater and dance. Workshops on a myriad of subjects are possible and would include such things as organic gardening/permaculture, wholistic healing, natural farming in all forms, workshops in all of the arts people wish to share, alternative energy workshops, perhaps fashion shows featuring creations in natural textiles created by locals and residents of the village, green housing workshops, etc.
Of course we expect our gardens and farm products to produce a surplus past our immediate community consumption needs and such would be marketed outside of the village proper.
Individuals and groups within the community would also have the ability and space needed for cottage industries in their fields of expertise in both goods and services. Such can also be marketed throughout the State and perhaps beyond at major events in Mexico.
We will put together a strong focus on internet compatible businesses and utilize our website and use Paypal accounts to accommodate purchases. An example of course would be my own sales of art prints and other products created with my designs. Such could also be expanded to other community members’ art as well. We would of course like for all cottage industry products to be of high quality and original in concept.
Each individual and/or cottage industry group would have to determine what products they wish to specialize in and how they will run their own businesses, albeit advisory assistance would be available from other community members, as well as folks more into the marketing end of things to get the products out there.
Although as yet not determined as to what percentage of all cottage industries profits would go into a Community Fund to help others start more and to fund general community needs such should be one of the communities priority decision making needs. Councils would have to decide how much, but it can be assumed that it would be somewhere between 10% & 25% of net profits. Community spaces and resources used for the cottage industries would be covered by the higher percentage.
Of course some individuals may opt to tutor classes for locals in languages and specific career skills which there may be a market for among locals and visitors to the region who frequent the area for the traditional seasons for tourists which is Nov. - Mid August (mid July to mid August being more Mexican National Tourism). There are also quite a number of foreign residents who already engage in some positive alternatives workshops and seminars. Todo Santos, our closest neighboring town, is considered an art community as well, with a number of galleries existing and a couple of fairs happening each year, along with organic markets and such.
There may also be the possibility to obtain permits for guided Eco Tours of the Sierra de Laguna World Heritage Bio-Reserve which borders the Eco Village property and such type tours can also be done on site and on surrounding ranchos, with the permission of their owners, for flora and fauna identification and traditional uses of herbs, both common and endemic to the region, as well of course of the importance to living in the best possible balance with the natural world. There are videos posted of such activities.

WHO WILL OWN THE LAND and Will we have deeds?:

The property and all community holdings will be set up as a Community Trust - Civil Association and all members will be listed as parts of that. Under Mexican law foreign residents cannot “own land” within 100 kilometers of the coast, or borders.
First Option being that Foreign residents are normally compensated for this via having their properties held by banks in trust with a 50 year lease, renewable for as long as it is renewed and which can be passed down to family, onto friends,  business associates, or be sold. Such trusts accounts cost considerably more to maintain than native or nationalized citizens would normally pay in property taxes on owned land, which are very low in Mexico. This is the least desirable means for the Eco Village community and its’ members as each home would be held independently in bank trust and would be outrageously expensive to maintain.
A Second Option would be to establish a Mexican Corporation which can be owned by foreigners and the property and holdings would be in the name of such corporation and its’ Board of Directors. This is normally done for businesses with limited owners and is subject to commercial, rules, regulations & taxes normal to all businesses, etc. Better than the bank trust but still not appropriate for the Eco Village community needs.
The Third Option is setting up a Community Trust as a Civil Association which can be comprised of anybody listed regardless of nationality as long as each has a residents visa (FM3 which is good for one year and renewable, or FM2 that is good for 5 years and which implies one is going for citizenship, though also can be renewed and just stay with that status until one can pass the required exams for citizenship) that can be obtained via any Mexican Consulate or Embassy in your country or nearby, or in country starting with a Tourists Card or Visa. Generally easier and faster to obtain FM3s or FM2s in your present country of residence/citizenship. Normally you would sit out your 6 month Tourist Card/Visa and then apply for an FM3 in country before your Tourist Card or Visa expires, however that would mean that you could not officially be listed as a member of the Civil Association until you obtain your residence document. No doubt the community would consider you a valid member if you contribute your fair share so that would not be an issue among ourselves, but if you would like the legal status and protections a residence visa is required.
A Civil Association/Community Trust can apportion home sites and homes to each of its’ members, as well as designate Community spaces, Cottage Industries spaces, Educational spaces, etc. though the property itself is held in Community Trust, which is essentially the same as the first option of a Bank Held Lease/Trust but without the excessive fees, taxes and rules/regulations that go with that. Of course being a member of the Community Trust also gives one much more control over their living spaces and all community endeavors.

That each individual and family unit deserves the absolute right to privacy is a given for this Eco Village Community. The broader issue of privacy for the community-at-large is also a given. If the Community Council decides that particular information or parts of the project are for community members to know and not to be broadcast universally that must be respected by all community members and visitors, or guest of members.
Generally speaking there will likely be very little outside of peoples personal lives that are really privacy issues, but when such might be the case it must be honored.
As the policy of this project is that it is both a-political and a-religious, but respects each persons rights to their own beliefs, those subjects are a matter of privacy and are not to be imposed upon others, nor be denied people in their private lives.
The community will not be hosting political or religious events and any attempts to foster those subjects upon community members who chose not to participate in discussions about them must be respected. As such they are not topics for community areas or events.
In the privacy of your own space do your own thing with whomever wishes to be part. Added should definitely be stated that Mexico frowns upon foreigners getting involved in it’s political process and to do so can get you thrown out of the country. If affiliated with the Eco Village it can cause some pretty serious problems so that is an absolute no no.
You can pretty much talk about/to individual politicians and environmental issues they may be able to affect, but cannot get involved in anything that may be considered campaigning on any parties’ or candidates behalf.
All that said, comedy/jokes about politicians is a national pastime so fair game as it is in most of the world.